As part of our Vision Therapy Success Stories series, we interviewed Jill to share the story of her son, Clayton. Clayton started with patching for amblyopia and strabismus when he was 15 months old. Despite seeing some progress with patching, atropine drops, and surgery, Clayton continued to struggle. Clayton is now recognizing great benefits from a vision therapy program under supervision of optometrist Dr. James Horning in Jacksonville, Florida. 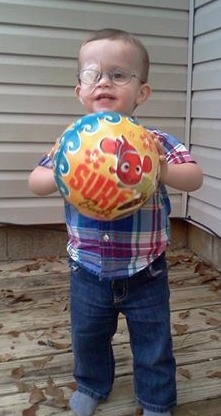 Clayton began patching when he was just 15 months old. His mother, Jill, who worked for an ophthalmologist in Tallahassee, noticed that light was not reflecting the same in both of Clayton’s eyes. Jill recalls, “I took Clayton to see a pediatric ophthalmologist in the practice where I worked. He said Clayton had amblyopia (lazy eye) and strabismus (eye turn). We needed to put him in glasses and start patching an hour a day. I went with that recommendation because, simply, he was the doctor. I worked for him and trusted him.

Patching, even for an hour a day, was tremendously challenging for a toddler

“Clayton was so cute in his glasses; he looked like a baby Harry Potter. But, patching, even for an hour a day, was tremendously challenging for a toddler. I had to find activities, such as playing with a ball outside, which kept his hands busy and distracted him from the eye patch.”

After one year, Clayton’s doctor examined him and determined that patching was no longer required. “I was thrilled not to be fighting that patching challenge!” But when Clayton was about three years old, his mother realized things still weren’t right. She reported that Clayton seemed to be lagging behind his pre-school classmates and he was very clumsy.  Therefore, she sought out a second opinion.

Jill recalls this doctor’s appointment as one of the hardest days. She sat in the exam chair with her toddler on her lap, and when the new pediatric ophthalmologist covered Clayton’s right eye, he “freaked out.” The doctor indicated Clayton still had amblyopia and strabismus. She recalled, “Clayton just started screaming and crying. Actually, we both sat in that exam chair bawling.”  Jill could not imagine patching Clayton as a toddler, so they started using atropine drops two to three times a week as an alternative. Atropine eye drops are used to dilate and temporarily blur vision in the unaffected eye, forcing the amblyopic eye to be used.

“Clayton did not complain about the eye drops. After a year and a half of using atropine, his visual acuity improved, but the eye alignment started getting worse. I was told by a third pediatric ophthalmologist in Jacksonville, where we had relocated, that he would eventually need surgery,” Jill said.

Clayton had bilateral strabismus surgery when he was five years old. “I thought it went great, since Clayton’s eyes were completely straight after the surgery,” Jill shared. Clayton’s visual acuities did not improve after the surgery.

He started playing flag football, and he couldn’t catch the ball or snatch a single flag. He still needed training wheels on his bike, and he was very clumsy

But, when Clayton was six years old, Jill noticed new problems. “He had started playing flag football, and he couldn’t catch the ball or snatch a single flag. He still needed training wheels on his bike, and he was very clumsy,” she added. Clayton struggled with these activities because he had no depth perception. Jill knew there was still more going on than just that.

As Clayton progressed in school, he was having a hard time understanding word problems when he was reading them. Jill says, “If I read him the word problems out loud, he could tell me exactly what the answer was.” Jill didn’t know these problems could have been due to his eye conditions until she met Dr. James Horning at a medical conference in Jacksonville. “We started talking, and I told him about Clayton. He shared information with me about vision therapy (VT), which prior ophthalmologists we consulted completely discounted, and I decided we should try it. A mother will do whatever she can to help her child,” Jill shared.

His VT treatment involved two processes. The first was to teach his brain to use both eyes together, such as tracking, aligning the eyes, and developing 3D vision. The second was to understand how to process visual information normally, which is done when reading.

So I asked “Do you think you’re seeing better now then you were at Christmas time?” His response was “Oh yeah!” When I asked why he said, “Because I’m not re-reading the same line over and over again.”

After three months in VT Clayton was reading a new book in the car and said “Momma, this is my favorite book!” We had a conversation about why it was his favorite. He said because it was about a dog and he liked dogs. So I asked “Do you think you’re seeing better now then you were at Christmas time?” His response was “Oh yeah!” When I asked why he said, “Because I’m not re-reading the same line over and over again.” I had to hold back the tears!

And now, after only five months in VT, Clayton is experiencing even more life-changing results. “Vivid Vision is by far his favorite part of vision therapy. He loves the virtual reality games, especially Hoopie.” Clayton now has depth perception, but they are still in therapy and more progress is expected. Jill reported that he is doing better with sports and school alike. “It has been completely amazing. He was making C’s in school and his most recent report card was straight A’s,” Jill said. “Plus, he’s not getting frustrated with his homework anymore,” she said, “we are so grateful we found vision therapy.”

“For us, patching was not successful. It was a horrible experience. I absolutely would recommend parents look at alternative treatments,” Jill said.