The Worth Four Light Test, also known as the Worth's Four Dot test or abbreviation W4LT, is one simple clinical test mainly used for assessing a patient's degree of binocular vision. We could say that W4LT is one of the simpler methods for investigating fusion, suppression, and anomalous retinal correspondence (ARC).

Binocular vision involves an image being projected by each eye simultaneously into an area in space and being fused into a single image. The Worth Four Light Test is also used in the detection of suppression of either the right or left eye. Suppression occurs during binocular vision when the brain does not process the information received from either of the eyes. This is a common adaptation to strabismus, amblyopia, and aniseikonia.

Image of the Worth 4 Dot Test 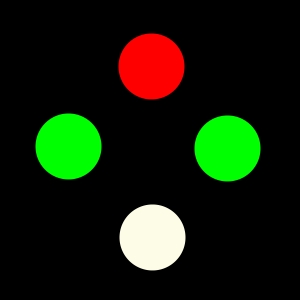 The W4LT uses a set of lights - two green, one red, and one white. When the patient wears red and green glasses or googles, some of the lights are seen by the right eye, some by the left, and some by both eyes.

How is the Worth 4 Dot Test Performed?

The W4LT can be performed by the examiner at two distances, at near (at 33 cm from the patient) and at far (at 6m from the patient). At both testing distances the patient is required to wear red-green goggles (with one red lens over one eye, usually the right, and one green lens over the left) When performing the test at far (distance) the W4LT instrument is composed of a silver box (mounted on the wall in front of the patient), which has 4 lights inside it. The 4 lights are arranged in a diamond formation, with a red light at the top, two green lights at either side (left and right) and a white light at the bottom. When performing the test at near (at 33 cm) the 4 lights are arranged in exactly the same manner (diamond formation), with the difference being that at near, the 4 lights are located in a handheld instrument (may be a flashlight-type tool or an attachment to a penlight torch).

Red/green glasses or goggles play an important role in this test. Because the red filter blocks the green light and the green filter blocks the red light, it is possible to determine if the patient is using both eyes simultaneously and in a coordinated manner. With both eyes open, a patient with normal binocular vision will see four lights. If the patient either closes or suppresses an eye they will see either two or three lights. If the patient does not fuse the images of the two eyes and sees double (diplopia), they will see five lights.

Indications for Using the Worth 4 Dot Test

The Worth Four Light Test is indicated for use when assessing the binocular functions, the ability of eyes to work in coordination, of an individual. It can be used to develop a diagnosis or to support or confirm an initial diagnosis. It can be used when wanting to assess whether the individual has a normal or abnormal binocular single vision response (BSV). It can be used to establish whether a patient has the ability for the eyes to fuse the light that is received from each eye into 4 lights. The test is indicated with the use of a presence of a prism in individuals with strabismus and fusion is considered present if 4 lights are maintained, with or without the use of a prism. The W4LT can also be indicated when aiding a person to develop and strengthen their fusional capacities.

If the images are unable to be fused the W4LT is still indicated to help to determine if an individual appreciates diplopia (double vision) or are suppressing an image from one eye. In cases of manifest strabismus, the test can help in determining the nature and type of the diplopia or which eye is suppressing. Therefore, is indicated in cases of a suspected central suppression scotoma as it can be used to detect where the lights may not be appreciated from the eye with the scotoma though in some cases of minimal deviation in the eye as demonstrated in a microscopic deviation a normal response of 4 lights may be reported. Though it can be used in these patients to prove the presence of peripheral fusion and that they have a bi-foveal fixation.

Other indications for the test include establishing an individual's dominant eye compared to the other and when evaluating reduced monocular visual acuity which shows no improve on pinhole testing.

Whilst there are no contraindications of the W4LT there needs to be caution in interpreting the results of individuals with BSV in natural conditions as they may show a diplopia response under the dissociation of the test. Also in individuals who have abnormal retinal correspondence (ARC), they may provide an unexpected response and those who have misaligned visual axis whom in natural conditions suppress may actually provide a diplopia response upon testing.

The patient sees all four dots :

Normal binocular response with no manifest deviation/eye turn/strabismus (termed normal retinal correspondence - NRC - without heterotopia). The patient sees four dots by the left eye (green lens) sees the right, left, and bottom dot (all as green) and the right eye sees the top and bottom dots (all as red). The combined image is a top red dot, left and right pair of green dots, and a bottom dot that appears to flicker or flash between green and red (as this dot is seen by both eyes and superimposed by the brain).

Suppression of the right eye

Suppression of the left eye