What is a Brock String?

A brock string is a common vision therapy tool. It consists of a white flexible cord or string, approximately 10 - 15 feet in length, with colored wooden beads that can be moved to various positions along the length of the string. The Brock offers instant feedback to the participant if their eyes are working together to focus on an object at various distances. The Brock string is often used in vision therapy for patients with vergence disorders such as Convergence Insufficiency, patients with Amblyopia (also called Lazy Eye), and for patients with Strabismus. 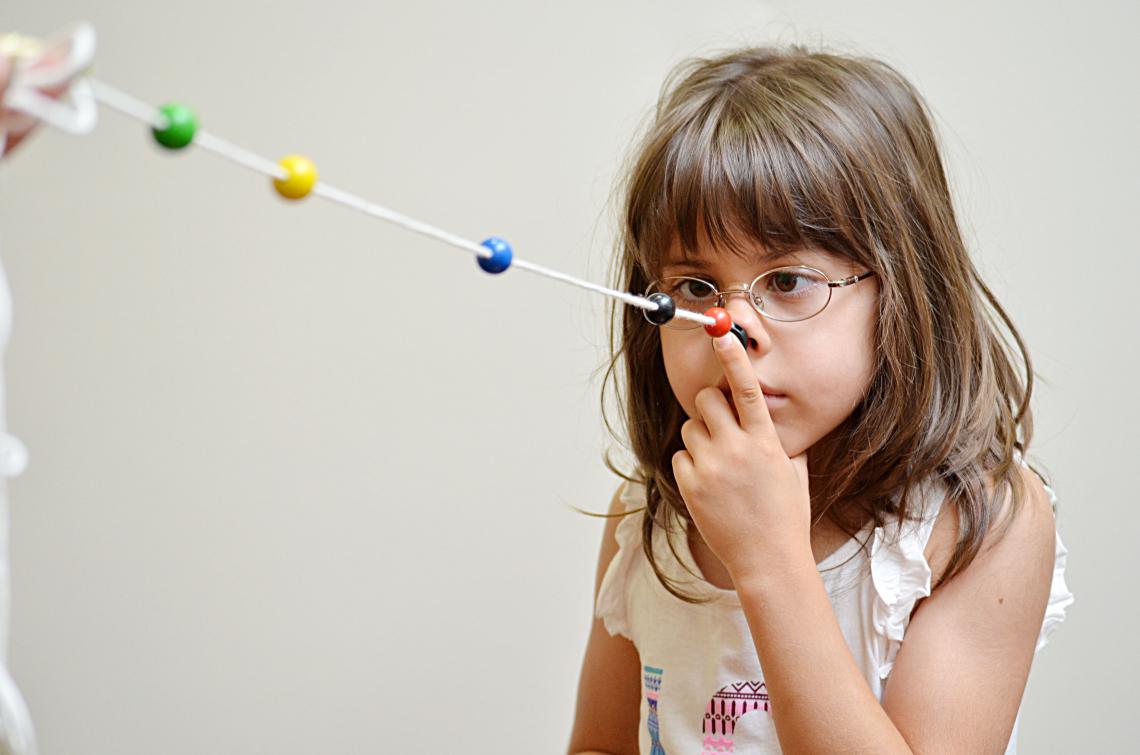 History of the Brock String

The Brock String is named after optometrist Frederick W. Brock (1899–1972) who was born in Switzerland. He was the inventor of various vision therapy tools. Brock's approach to treating eye disorders, specifically Strabismus, was instrumental in paving the way to overcoming a long-standing medical consensus that stereopsis could not be acquired in adulthood but only during a critical period early in life before the age of 6.

Susan R. Barry ("Stereo Sue"), a neuro-scientist, received widespread media attention for having acquired stereo vision in adulthood and considered Dr. Brock her "hero" as his work paved the way for vision therapy and its use in the recovery of stereopsis. Listen to what she has to say about her experience with the Brock string in an interview with Dr. Paul Harris:

How to Use the Brock String

Try to be aware of other objects periphery or in your field of view as you practice.

Below is a series of examples. The string on the right side shows the actual "top-down" location of the green, yellow, and red beads. The image to the left shows what a patient would see if both eyes are focusing on a single bead. Notice that double vision, in this case, is normal - this is called physiological diplopia. 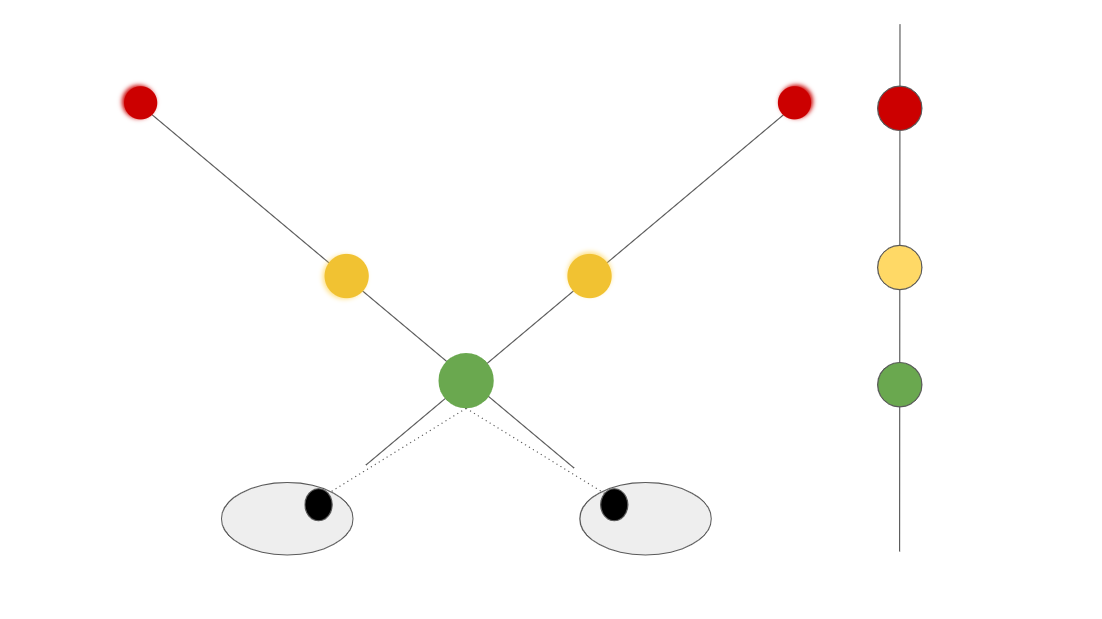 In this first example, the patient is to look at the nearest (green) bead. The green bead should appear single and a broad "V" will be made by the string. Both the yellow and red beads will appear slightly blurry and doubled. 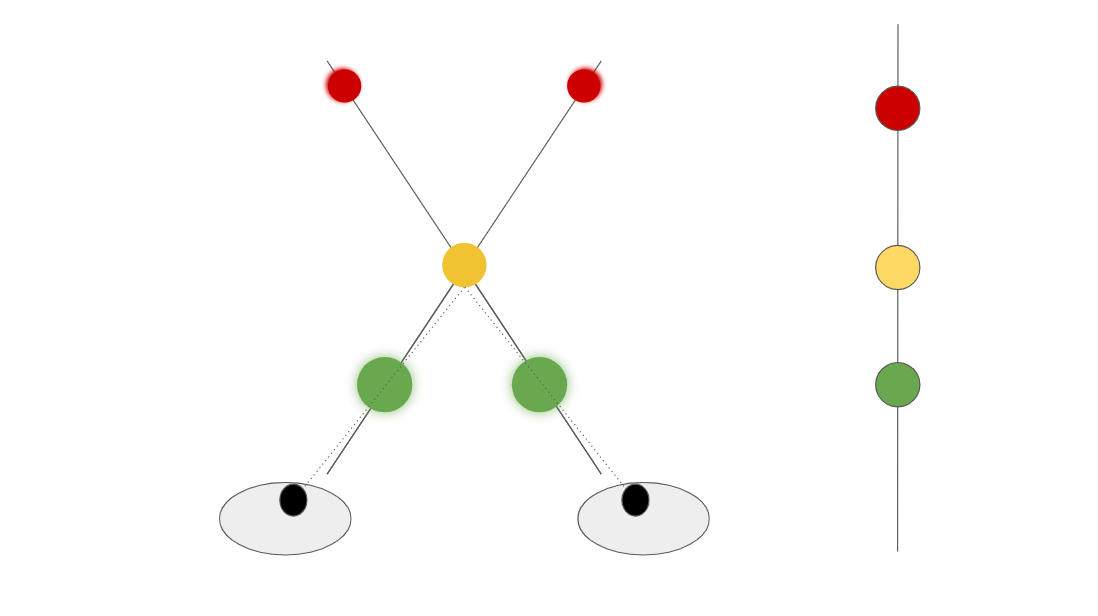 In the second example, the patient is to look at the middle (yellow) bead. The yellow bead should appear single and the string should form an "X" through the yellow bead. Both the green and red beads will appear slightly blurred and doubled. 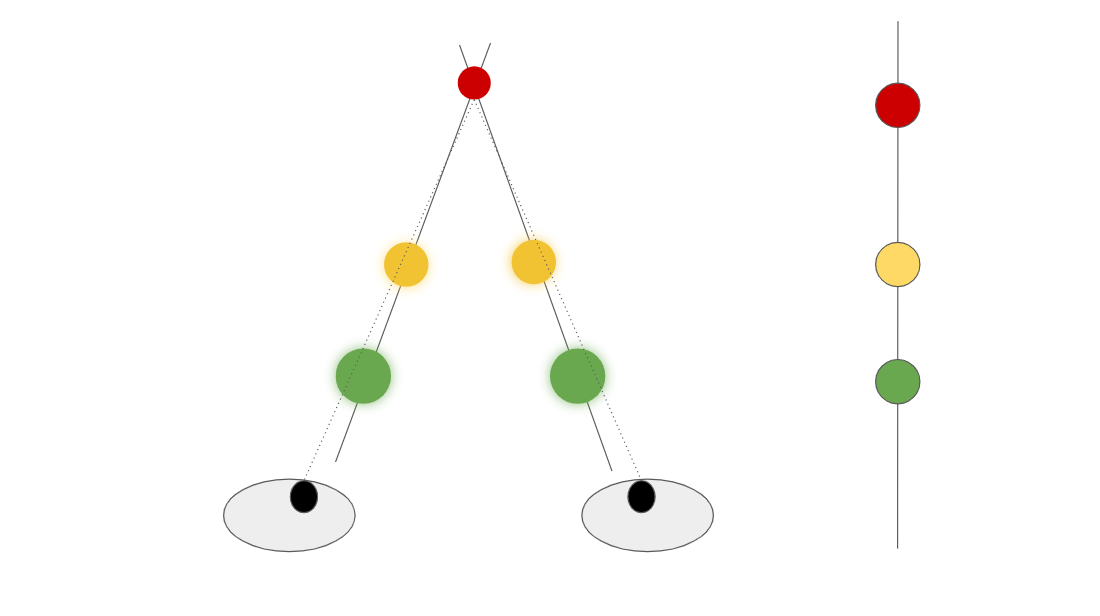 In the third example, the patient is to look at the far (red) bead. The red bead should appear single and the string should form an "inverted V" through the red bead. Both the green and yellow beads will appear slightly blurred and doubled. 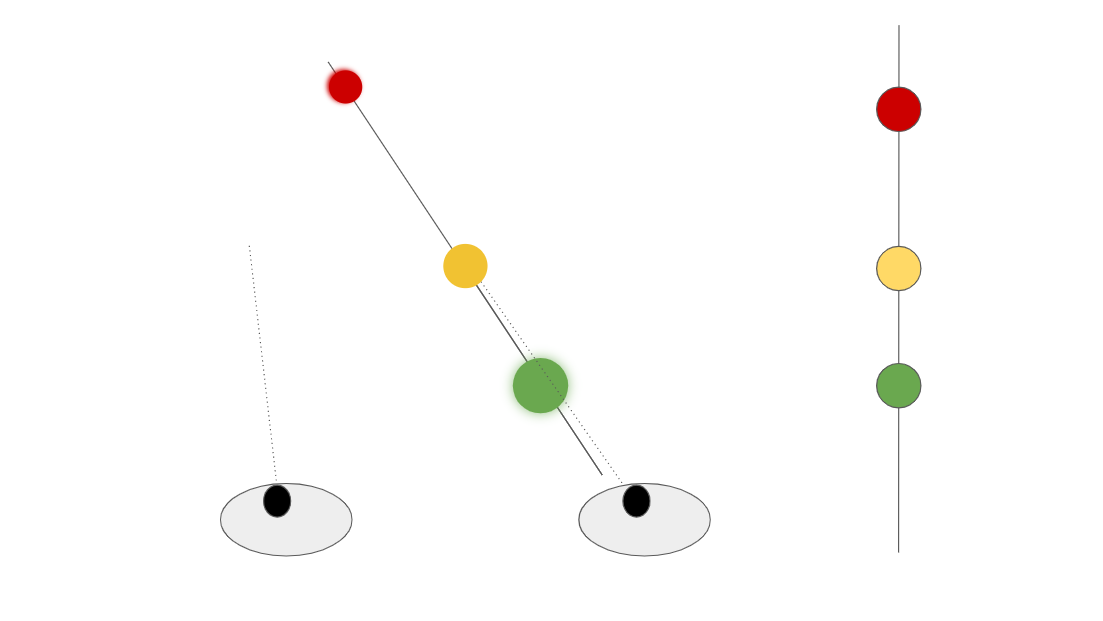 Let's look at one final example. Here the patient's left eye is turned outward in a condition called exotropia. This is an example of strabismus - many patients with strabismus also suppress images from the turned eye so that the person doesn't see double constantly. In this example, the patient suppresses the left eye's images and would not see the "X" that a normal patient would see.

What does the Brock String do?

The purpose of the Brock String is to help the patient learn to see with both eyes simultaneously. When the subject looks at the first bead, he or she should see one bead with two short strings leading toward it and two longer strings leaving it. The patient should see two strings entering the bead and two strings leaving it, making a large“X”. The beads that are not being looked at will appear in the distance on each of the white strings you see coming out or in from that fixation bead.

Patients are instructed to alternate fixation and focus from one bead to the next while maintaining awareness of physiological diplopia.

Why is the Brock String important in vision therapy?

The Brock string is a great detection tool to help identify if you may have problems with convergence (such as Convergence Insufficiency or Convergence Excess) or suppression. The Brock string is also used therapeutically in vision therapy to help patients develop skills of convergence as well as to disrupt suppression. Also, the activity can be altered to make it easier or more difficult by bringing the beads closer/further to the nose and/or by employing lenses and prisms.

Although this procedure is usually associated with binocular vision and anti-suppression therapy, it can also be a valuable procedure for developing accurate fixation skills under binocular conditions.

How do I make a Brock String?

To make a Brock String you need:

While there are many uses for the Brock string, this activity should not be undertaken as a do-it-yourself tool, you will have the best success under the supervision of an eye care professional such as an optometrist or vision therapist.