Stereo illusions are 2D images that trick the brain into seeing a 3D scene giving the viewer the illusion of depth where the image appears to pop out from the background. Below are a few different types of Stereo Illusions that achieve this effect.

Stereoscopy (also called stereoscopics) is a technique for creating or enhancing the illusion of depth in an image by means of stereopsis for binocular vision. The word stereoscopy derives from Greek στερεός (stereos), meaning "firm, solid", and σκοπέω (skopeō), meaning "to look, to see" Any stereoscopic image is called a stereogram. Originally, stereogram referred to a pair of stereo images which could be viewed using a stereoscope.

Most stereoscopic methods present two offset images separately to the left and right eye of the viewer. These two-dimensional images are then combined in the brain to give the perception of 3D depth. This technique is distinguished from 3D displays that display an image in three full dimensions, allowing the observer to increase information about the 3-dimensional objects being displayed by head and eye movements.

Wiggle stereoscopy is an example of stereoscopy in which left and right images of a stereogram are animated. This technique is also called wiggle 3-D or wobble 3-D, sometimes also Piku-Piku (Japanese for "twitching") The sense of depth from such images is due to parallax and to changes to the occlusion of background objects. In contrast to other stereo display techniques, the same image is presented to both eyes. Animation can be done in a web browser with an animated GIF image, Flash animation, or JavaScript program. 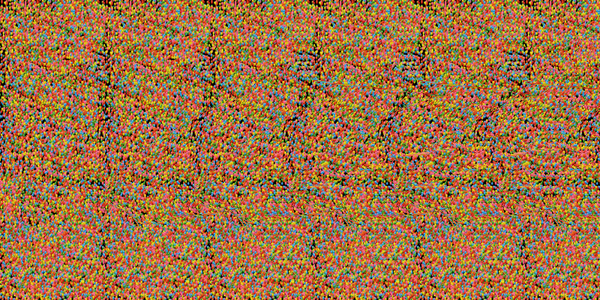 An autostereogram is a single-image stereogram (SIS), designed to create the visual illusion of a three-dimensional (3D) scene from a two-dimensional image. In order to perceive 3D shapes in these autostereograms, one must overcome the normally automatic coordination between accommodation (focus) and horizontal vergence (angle of one's eyes). The illusion is one of depth perception and involves stereopsis: depth perception arising from the different perspective each eye has of a three-dimensional scene, called binocular parallax.

Autostereograms are similar to normal stereograms except they are viewed without a stereoscope. A stereoscope presents 2D images of the same object from slightly different angles to the left eye and the right eye, allowing us to reconstruct the original object via binocular disparity. When viewed with the proper vergence, an autostereogram does the same, the binocular disparity existing in adjacent parts of the repeating 2D patterns.

There are two ways an autostereogram can be viewed: wall-eyed and cross-eyed.[a] Most autostereograms (including those in this article) are designed to be viewed in only one way, which is usually wall-eyed. Wall-eyed viewing requires that the two eyes adopt a relatively parallel angle, while cross-eyed viewing requires a relatively convergent angle. An image designed for wall-eyed viewing if viewed correctly will appear to pop out of the background, while if viewed cross-eyed it will instead appear as a cut-out behind the background and may be difficult to bring entirely into focus.[b]

The Pulfrich effect is a psychophysical percept wherein lateral motion of an object in the field of view is interpreted by the visual cortex as having a depth component, due to a relative difference in signal timings between the two eyes.

The effect is generally induced by placing a dark filter over one eye but can also occur spontaneously in several eye diseases such as cataract,[1] optic neuritis,[2][3] or multiple sclerosis.[4] In such cases, symptoms such as difficulties judging the paths of oncoming cars have been reported. The phenomenon is named for German physicist Carl Pulfrich, who first described it in 1922.[5][6] The effect has been exploited as the basis for some television, film, and game 3D presentations.

A similar effect can be achieved by using a stationary camera and continuously rotating an otherwise stationary object. If the movement stops, the eye looking through the dark lens (which could be either eye depending on the direction the camera is moving) will "catch up" and the effect will disappear. One advantage of this system is that people not wearing the glasses will see a perfectly normal picture.

Over 368 Vivid Vision Providers prescribe virtual reality alongside patching and vision therapy to treat your lazy eye. Sign up through our doctor locator to see if Vivid Vision is right for you.